We got 4th overall and also qualified for the finals as the 3rd verified local team! My teammates were absolute beasts even though they were quite busy :) Challenge names with 🍭 are supposed to be “easier” while those with 🩸 come with first blood prizes (I managed to get 2!). 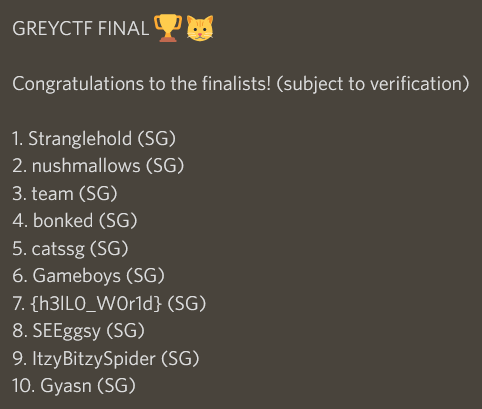 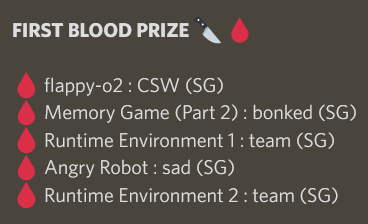 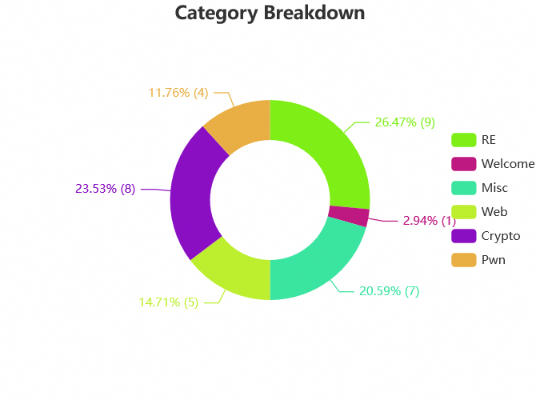 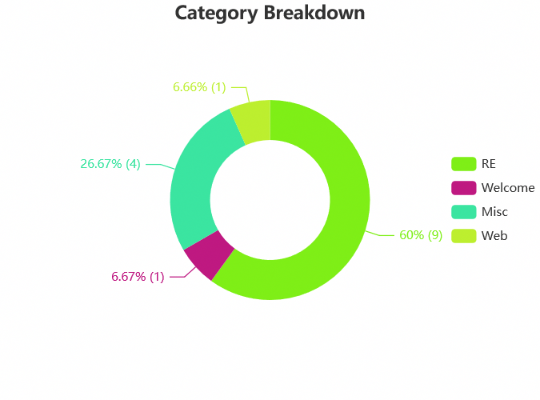 You have entered a top secret robot production facilities and your clumsy friend tripped the alarm. You and your friends are about to be “decontaminated”.

Luckily, you have unpacked the authentication firmware during previous reconaissance. Can you use them to override the decontamination process?

In the provided archive, there are 100 stripped 64-bit ELF binaries.

If we open a few of them in IDA Pro, we’ll see that all of these binaries basically do the same thing: fgets is used to read an input string from stdin and then each character is checked against 2 hardcoded strings using some arithmetic operations. What differs across the binaries, though, are the input length, the 2 hardcoded strings, the constant used for the arithmetic operations, and the addresses of the main function and some locations.

If we connect to the server and port provided in the challenge description, we’ll see that we’re supposed to provide the correct input strings (passwords) for specified binaries (challenge codes) within 10 minutes.

Technically there’s enough time to do this manually since the server turned out to only request input strings for 5 binaries, but I didn’t know this and went ahead to learn and use angr for automated reverse engineering which I suppose is what’s hinted by the challenge name. It went surprisingly well for my first time!

We’ll be using angr’s SimulationManager to help us find a program state with the correct input string by means of symbolic execution, so there’s a few things we need to identify in each binary we process:


And in main we want check_input(input) == 0; to fail meaning we don’t want the jz after check_input to be taken, so the location we should tell angr to find for is 0x401395.
But of course as mentioned earlier, I noticed these address locations and the address of main change across the binaries provided, so I first located fgets using the ELF binary’s Procedure Linkage Table (PLT) and then retrieved the first and only callgraph predecessor of fgets which is main.

I retrieved the first basic block in main and searched through the instructions for mov esi, xx where xx is the length argument given to fgets to retrieve user input. xx - 1 will then represent the actual input length because fgets will also take in a newline character.

I also constrained the input to only be printable characters because the code in check_chr appears to try to check for that.

GO and try to solve this basic challenge.

FAQ: If you found the input leading to the challenge.txt you are on the right track

In the given archive there’s a 64-bit ELF Go binary and a challenge.txt containing encoded text that looks like some variant of Base64 encoding.
From blackbox analysis, the encoding scheme also seems similar to Base64 in that 3-byte input blocks (aaa) are independently encoded to 4-byte output blocks (CGTx), and padding (-) is used to keep the output length a multiple of 4 when the input length is not a multiple of 3:

Let’s check out the pseudocode of the binary in IDA Pro for further analysis.

A string is read from stdin, converted into a Go slice of bytes, and then passed into main_Encode. The encoded slice of bytes is then converted back into a string and printed.

At the bottom, we see that for remaining input bytes not covered by the chunks of 3, the character - is padded to output. All these observations match what we found from our blackbox analysis and it really does seem like Base64 encoding. For additional confirmation, I also Googled the >> 18 & 0x3f seen in the code and the results all show code for Base64 encoding.
The difference here is that NaRvJT1B/m6AOXL9VDFIbUGkC+sSnzh5jxQ273d4lHPg0wcEpYqruWyfZoM8itKe is used as a custom character set with - as the padding instead of the standard ABCDEFGHIJKLMNOPQRSTUVWXYZabcdefghijklmnopqrstuvwxyz0123456789+/ with = as the padding.
At this point I just tried decoding the contents of challenge.txt in CyberChef with the custom Base64 character set and it turns out 4 rounds of decoding are needed.

This time it HAS to be harder.

A 64-bit ELF binary is given as well as a challenge.bin containing some encoded/encrypted data.

In IDA Pro we see that the ELF’s main references functions hs_main and ZCMain_main_closure which is a sign that this is a GHC-compiled Haskell binary.

The drawback though is that 5 unused arguments are added to some of the anonymous functions thus cluttering up the output. In the cleaned-up output with renamed variables below, I’ve just renamed these arguments to {5argsthing} so that it’s less of an eyesore.

Now to be frank I can’t explain in-depth how the Haskell code flow exactly works, but this is my general interpretation:


The possible UTC time used to produce the contents in challenge.bin could range from the time binary was made to the time challenge.bin was made. I replicated everything in Python and bruteforced for the time used although it turns out to be just the exact last modified time of challenge.bin.

(flag format is greyctf{…} because I made a mistake :p)

Hint: Use your browser’s dev tools.

The website lets us play a game called “Clumsy Bird” which is just a Flappy Bird clone. In the HTML we can see two scripts being loaded.

melonJS is just a library so I searched for “flag” in clumsy-min.js which is helpfully pretty-printed by the Firefox Developer Tools.

From the Javascript snippet above where “flag” is found, it seems that we just need to call genFlag() so that’s what I did right in my Firefox Browser Console and out came the flag “5uch_4_pr0_g4m3r”.

I know you cheated in flappy-js. This time the game is written in C, I don’t think you can cheat so easily. Or can you?

Show me your skills by getting a score of at least 64.

This one is solved together with 🩸 flappy-o2 below.

This challenge uses the same binary as flappy-o.

Every 10000 points you reach, you unlock a character of the bonus flag. This is the real test of your skills.

This time the Flappy Bird game runs in an unstripped 64-bit ELF and you’re hinted to patch it, but I found it easier to just lift out the flag decoding functions and run them separately.

In main, gameLoop() is called which calls updateAndDrawFlag().

The arrays flag1 and flag2 are populated by genFlag1() and genFlag2() respectively based on your score and actualScore. Linear-feedback shift register (LFSR) functions lsfr1() and lsfr2() are used to achieve this along with hardcoded arrays key1 and key2 as well as a hardcoded lsfr2_seed.

Once we know these key components of the flag generation, we can copy the relevant pseudocode out, compile it and run it to print both flags. We just have to increment score in a loop to simulate how it is incremented by checkAndHandleCollision() in gameLoop(). More specifically, it should be incremented until 10000 * 8 * 25 because actualScore = score / 8; and the condition (actualScore / 10000) <= 25 is used to generate the 25 DWORDs of the 2nd flag.

Here’s a fun game to destress.

Do you know where the image assets are stored? I’ve made a nice drawing for you.

We’re supposed to look for some image asset in the APK, so I used apktool to decode the APK with apktool d memory-game.apk and searched with ripgrep in the res/drawable* folders because that’s where image resources are supposed to be stored according to the Android Developer Documentation.
Turns out that there’s a flag.png in res/drawable-hdpi/ with the flag text in the image.

Can you finish MASTER difficulty in 20 seconds? If you can, the flag will be given to you through logcat with the tag FLAG.

I opened the APK in JADX and did a text search for “flag” and found results in com.snatik.matches.engine.Engine.onEvent(FlipCardEvent). This should be what we’re looking for as the code Log.i("FLAG", ...) matches the challenge’s description of the flag being printed “through logcat with the tag FLAG”.


Now that we know which part of the code to look at, I switched to Bytecode Viewer to decompile the APK because I prefer the built-in Procyon Decompiler’s output.
Below is the relevant segment of the code in com.snatik.matches.engine.Engine.onEvent(FlipCardEvent) where the flag is logged if MASTER difficulty was chosen and the game was finished within the 20 seconds time limit:

You can run it here in OnlineGDB and it’ll give you the flag as the output.

The binary is packed. Try to decompile it and you will find unreadable code.

Find out how it is packed and unpack it to recover the original binary.

Hint: Run strings on the binary. There are some interesting strings in there.

If we run strings on the provided ELF binary as hinted, we’ll see the strings “UPX!”.

This means that the ELF is likely packed with UPX. If vanilla UPX is used, such binaries can simply be unpacked with the official upx binary itself by adding the -d flag:

Ok now where’s the flag? If we run parcel or unpackedparcel, it’ll ask us for the address of certain functions like h12. Now that we have the unpacked unstripped binary unpackedparcel, we can get those addresses easily using nm -t d unpackedparcel | grep <function_name>.

I tried to send you a bunch of messages :)

The text file given contains a few different kinds of encoded messages, but the huge chunk of empty spaces/lines in the middle are the most suspicious. Let’s take a closer look at the hex values used.

The empty space chunk consists of only 2 values — 0x20s and 0x09s, so my first thought was that it represented either binary encoding or morse code. Brief experimentation in CyberChef will reveal that it is indeed binary encoding where the 0x20s represent 0s and the 0x09s represent 1s. Here is the decoding done in CyberChef.

Calculator is a nice invention

Prefix notation is used to evaluate these math expressions, so I just took a Python prefix calculator script from https://stackoverflow.com/a/5307565 and edited the tokens to match those required in this challenge:

Router firmware is a nice target to start your bug hunting journey. But you have to first understand how the firmware is loaded.

There is always a file in the firmware image that tells the router what services to start. Find this file.

I ran binwalk -e on firmware.img to extract the Squashfs filesystem from the image so that we can find the file we are told to look for.

After that, I just searched for the flag fragment grey in the extracted filesystem using ripgrep and the flag was found in /etc/inittab.

HTTP is not secure. Inspect this packet dump and you will know why.

Find the packet related to an image upload and extract the image. Then, find the name of the creator of this image.

Open the given PCAP in Wireshark and use File -> Export Objects -> HTTP to view HTTP objects transmitted.


There’s a ctf.png in the multipart/form-data HTTP object with the flag string in a PNG tEXt chunk labelled “Author”.

Something went by too quickly!

I analyzed the given website but nothing stood out in the HTML source or the HTTP request/response headers, so I ran a “Discover content” scan with Burp Suite and it quickly found /admin.php with the flag in the response body.